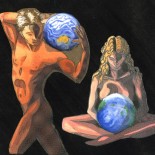 Australia Honors Its Founders (What Were Their Names?)

”What kind of country would forget the name of its first prime minister?”

That chiding question starts the official invitation to Australians — 19 million people of multiethnic origin — to celebrate the achievement of their founding fathers in fashioning a democracy that will be a century old on Jan. 1, 2001.

The invitation, announcing a year-long program of 2,000 events to commemorate the creation of the Australian nation from six British colonies, concedes that a popular celebration of the forging of the federation is a hard sell.

”It seems that Australians know more about the first president of the United States, George Washington, than they do about Edmund Barton, our own first prime minister,” the booklet concedes, adding: ”But perhaps that’s because our nation was created with a vote, not a war.”

This week at Tenterfield, a farming township 450 miles north of Sydney, where an early federalist, Sir Henry Parkes, made a pioneering speech in 1890 calling for ”a national government,” a store-front poster advertising federation festivities has a local footnote added, asking ”To the easy-going Aussie, does it matter very much?”

Tony Eggleton, director of the centenary program, said focus groups that had been questioned about Australia’s founding fathers were ”often embarrassed” that they knew much more about American history than that of Australia and Prime Minister Barton, who headed the first federal government for three years. Mr. Barton’s words, ”We have for the first time in history a nation for a continent and a continent for a nation,” are much better known here than his name.

Mr. Eggleton, a veteran political operator, is confident that his $50 million program to celebrate the centenary can work, in the shadow of the successful 2000 Olympics in Sydney, ”to direct some of the national pride in sports success toward recognition of our achievement of democratic government.”

Here’s an educational, fun Federation general knowledge quiz you can use on the day:

This entry was posted on January 1, 2020 by Equanimity Foundation.