The International Fixed Calendar simplifies dates and accounting because every month has the same number of days and dates and days of the week are fixed. The same calendar can be used every year! The main difference is the extra month of Sol in the middle and the “intercalary days” (Year Day and Leap Day) that are outside the week days.

Wikipeadia explains the pros and cons well of it and calendar reform proposals in general. Kodak company is famous for having used it for 60 years.

I got tired of having to check the Gregorian calendar every fortnight to keep up with the date of spreadsheets. Believing there must be a better way, I discovered the IFC. However, to use it on a daily basis, it’s necessary to be able to easily convert dates between the IFC and Gregorian calendars, so I adapted the old image (below) to incorporate the Gregorian calendar (above) for easy reference on paper. Someone was keeping a handy conversion site at this url /internationalfixedcalendar.com/ but it has been neglected. In any case, another key benefit of the IFC is the ability to dispense with the complexity of digital technology. The watermark shows the Gregorian months (not dates). You’ll notice the months lag behind the IFC in the first half of the year and in the second half they precede because of the extra month in the middle, Sol. The end of the financial year (which in Australia is the 30th of June in the Gregorian calendar) falls on the 13th of Sol in the IFC, because the Gregorian calendar has 181 days in the first half of the year and 184 in the second half. If we used the IFC, the end of the financial year would be the 14th of Sol, exactly in the middle. Quarterly periods in the IFC are exactly 13 weeks; January 1st – April 7, April 8 – Sol 14, Sol 15 – Sept 21, Sept 22 – Dec 28. 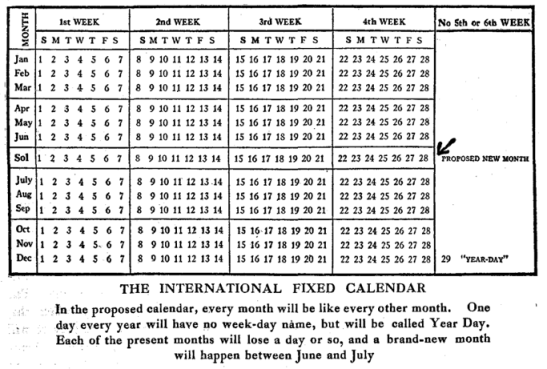 “Year Day” could be an accounting-free day, where everything is done for free, as envisaged by The Free World Charter.

It’s 2017, and as Bob Gardin mentioned in The World Calendar Guest book on 2nd Dec, 2004, it’s a good year for adopting either TWC or the IFC, I assume because he observed that January 1st is Sunday in all 3 calendars.
Obviously we’ll have to wait at least another dozen years for any likelihood of that. (I only recently learnt that the GC is recyclable every dozen years.)
I’ve been using the IFC in my rental property because it’s more ‘fortnightly-friendly’ than TWC. Someone has put a conversion facility up on the Internet which is very convenient (www.internationalfixedcalendar.com) and I’ve made a paper version of it. However, I’ve found there’s not much interest in it and the fewer days and extra month of the IFC puts people off. I continue to use it at home, however and willingly teach those who are interested.
The World Calendar involves fewer changes and, being ‘quarterly-friendly’, probably appeals to businesses more.
I made a printable paper conversion of the Gregorian Calendar watermarked onto TWC that you might find interesting – I didn’t see anything like it on your website. It’s attached here as a pdf. You might like to check it for mistakes. I’d appreciate your feedback on it. I’m not asking for anything and offer it freely in support of your efforts to make life that little bit easier for everyone.
Yours,
Simon Cole
Brisbane. 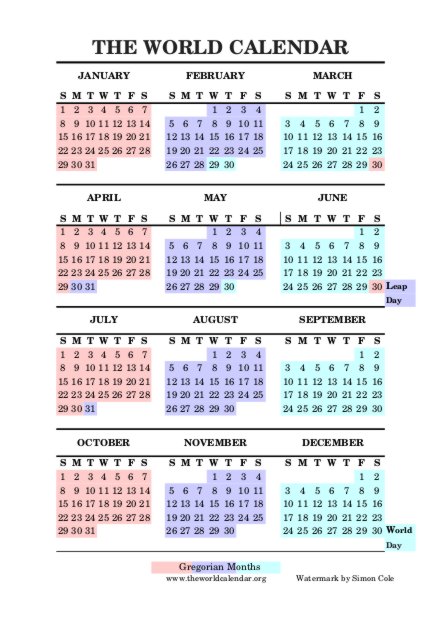 This entry was posted on July 1, 2016 by Equanimity Foundation.